There’s a lot of misconceptions out there about what semen actually is and what it does. This article breaks down the truth behind semen, answering all your questions and clearing up misconceptions.

The average volume of semen produced by a man is about 3.4 ml. Sperm are the cells that fertilize a female’s egg during sexual intercourse, resulting in pregnancy. Semen is produced in the testicles and stored in the epididymis.

How much semen should you produce?

If you’re producing semen, chances are good that you’re doing it right. But how much semen should you produce? The answer may surprise you.

According to a study published in the journal Andrology, the average man produces about 3.4 mL of semen per ejaculation. That’s about one teaspoonful. However, your mileage may vary. Some men produce more semen than others. And some men produce less.

So what’s the big deal? Well, for one thing, semen is full of nutrients that are essential for your health. It’s also a source of pleasure for many men (and their partners). So if you’re not producing enough semen, you may be missing out on some of the benefits of ejaculation.

Fortunately, there are things you can do to increase your semen production. If you’re concerned about your output, talk to your doctor or a sex therapist. They can help you figure out if there’s a problem and what steps you can take to improve things.

How long can semen stay viable?

Sperm is released during ejaculation and is responsible for fertilizing an egg. Sperm can live inside a woman’s body for up to five days, which means that pregnancy is possible even if intercourse occurs several days before ovulation.

How long semen remains viable depends on a number of factors, including the health of the sperm and the conditions in which it is stored. Sperm can live for up to five days in a woman’s reproductive tract, but they are more likely to live for two to three days. The viability of sperm decreases after ejaculation, so it is best to have intercourse as close to ovulation as possible.

Sperm can travel up the vagina and into the fallopian tubes, where an egg is usually waiting. If the sperm fertilizes the egg, this causes pregnancy.

However, for pregnancy to happen, a lot of things need to be just right. The sperm has to be healthy and strong, and the egg has to be in just the right place at just the right time. This means that even if you have sex when you’re ovulating (when your egg is ready to be fertilised), you still might not get pregnant. There are lots of myths about how you can or can’t get pregnant from different sexual activities.

Semen is the fluid that is released from the penis during ejaculation. While semen itself does not cause sexually transmitted infections (STIs), it can transmit them. This is because STIs can be present in the semen of an infected person. When someone with an STI ejaculates, their infected semen can enter the body of their sexual partner, causing them to become infected.

There are a few ways to reduce the risk of transmitting STIs through semen. One is to use a condom during sex. Condoms create a barrier between the penis and the body of the sexual partner, which can prevent semen from entering the body.

Another way to reduce the risk of transmitting STIs through semen is to have your partner get tested for STIs before having sex.

Now that you know everything there is to know about semen, don’t be afraid to ask questions and learn more about this fascinating subject. After all, knowledge is power! Understanding how your body works can only lead to good things, so get out there and start learning. Who knows, you might just find that you have a new appreciation for this amazing bodily fluid. 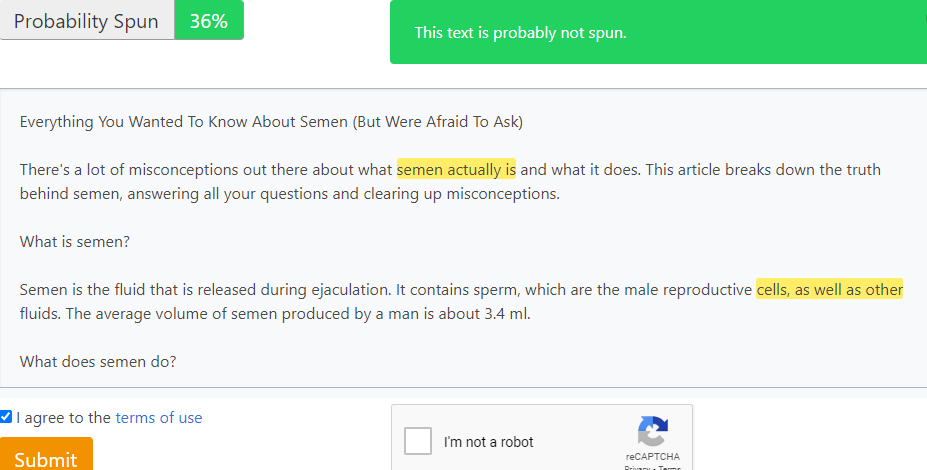