Story of a Brave Donkey – One day a farmer’s donkey slipped and fell down into a deep well. The animal cried mournfully for hours as the farmer was not able to help him.

Ultimately, the farmer thought that since the animal was old it just wasn’t worth it to retrieve the donkey. He decided to cover up the well with mud and bury the donkey.

He also called all his neighbors to come over and help him in filling the well with the mud.

As the donkey understood what was happening he cried unbearably but to everyone’s astonishment, he quieted down and looked relaxed. All were astonished at what they saw.

With each shovel of mud that dropped on the Donkey back, he did something astonishing. The donkey would shake it off and take a step upwards. 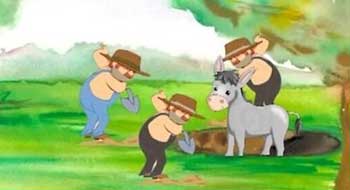 As all continued to heap mud on top of the poor animal, he used to shake it off and take a step upwards.

Very soon, all were stunned as the donkey stepped up over the edge of the well and ran off to never come back.

Life is going to shovel difficulties on you all along.

The lesson is not to get bogged down by them.